The vast majority of games involve a boss, or many bosses, or many different kinds. You’re a gamer. You know this. However, have you ever thought about the development process behind your favorite boss? When a person making a game sits down to make that boss at the end of a level, what is in their heads? Untame, the indie development team behind Mushroom 11, have published a dev blog talking about how they have designed the boss encounters in their upcoming puzzle game;

A boss serves as an end-of-level living obstacle. It is usually bigger and stronger than its minions, and is contextually connected to the level as its ruler or the last line of defense. The boss’s strength is usually countered by a well balanced vulnerability, and it is often brought down by its own powers.

For designers who enjoy elaborate mechanical system, designing a boss is pure joy. Though the work invested in a single boss is often disproportional to the amount of time spent on it by the player, these short experiences are usually retained and even define the entire game. 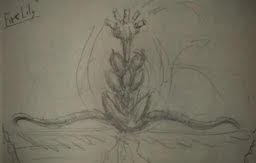 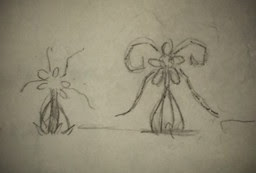 It is interesting to think about designing a boss from the ground up. Even these early sketches show that direction that Untame was moving in designing this flaming flower. However, there’s a lot more to a boss than just the artistic design;

As the boss keeps launching fireballs, defeating it requires timing the climb over the trunk, as well as the movement across the petals when they’re open, allowing advanced players to leverage the bulb closure to catapult to the other side.

Since a boss is a mini-game in its own merit, it should provide a system of rules and trade-offs, with room for creativity and self-expression (like any game should). This notion is held for all the bosses in the game, which may account for the extended development timeline: making bosses takes as much as 50% of the production time!

One of the final issues that Untame discusses in the blog post is the difficulty curve of the bosses, something any gamer is intimately familiar with. Make a boss too difficult, and it may drive players away (Dark Souls being an obvious exception), but too easy, and it may not be the challenge you want.

Another issue left from the original design was the large pool of lava. Getting the bottom seeds was by far the most difficult challenge in this boss. It is legitimate to have a hard challenge right off the bat, but falling into the pit trying to get the bottom-left seed was just too frustrating when the end was in sight, forcing the player to climb again all the way.

I’d encourage you to read the whole blog post here. It is a great piece of insight and a wonderful peak into the mind of an indie dev!

Written by
Jacob Wood
Editor-in-Chief of IndieHangover.com. With a soft spot for epics, sagas and tales of all types, Jacob approaches games as ways to tell stories. He's particularly interested in indie games because of the freedom they have to tell different stories, often in more interesting and innovative ways than Triple A titles.

Review: Mushroom 11 by Untame
4 years ago